ASHOKA®
THE DIAMOND OF LEGEND®

The original Ashoka diamond came to life hundreds of years ago as a breathtaking 41.37 carat D Flawless gem. Over the centuries this mystical, flawless diamond, said to have the ability to banish sorrow, has shared its remarkable power and beauty with monarchs, movie stars and captains of industry.

William Goldberg was more than merely dazzled by the original Ashoka diamond. He was inspired by it. He studied its every facet. The elegant, elongated shape and precisely rounded corners. The way it captured the light, then transformed and released it with incredible energy. Ultimately, it served as inspiration for a cut so unique and distinctive, it was granted its very own patent. 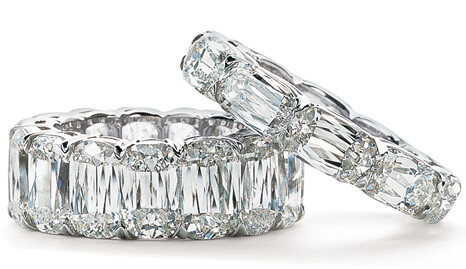 It takes a special piece of rough to become an ashoka® diamond. Fewer than one percent measure up to the exacting standards. The rough must be larger and longer than most. The cut has to be precise and true to the qualities of the stone. The polish must meet unparalleled standards of excellence. Every ASHOKA® diamond is cut by one of William Goldberg’s master cutters, guaranteeing its quality, brilliance and rarity.

There is only one ASHOKA® diamond. First introduced by William Goldberg in 1999, the United States Patent and Trademark Office has recognized its distinctiveness by issuing a federal trademark registration covering the configuration of the stone. It is exclusive. It is extraordinary. And it cannot be duplicated. The Diamond of Legend®.

With its distinctive cut and 62 facets, the ASHOKA® diamond appears 30 percent larger than an emerald cut diamond of the same carat size.

On our website, we use services (including from third-party providers) that help us to improve our online presence. The following categories of cookies are used by us and can be managed in the cookie settings. We need your consent before being able to use these services. Alternatively, you may click to refuse to consent, or access more detailed information and change your preferences before consenting. Your preferences will apply to this website only. You can change your preferences at any time by clearing your browser history/cache or visiting our privacy policy page.

By authorizing third-party services, you allow the placement and the reading of cookies and the use of tracking technologies required to keep our website reliable and secure.

Essential
These cookies are required to run available services and to provide basic shopping functions. These cookies are exempt from consent according to the exceptions provided by the Article 82 of Data Protection Act.
Personalization
These cookies provide a custom experience on our website.
Analytics and statistics
These cookies allow us to measure visitors' traffic. They help allow us to understand which products and actions are more popular than others.

Review and set your consent preferences for each partner below. Expand each partner list item for more information to help make your choice. Some personal data is processed without your consent, but you have the right to object.

You can find out more about which cookies we are using or switch them off in settings.